Clover at the Green Day Authority posted a link to a nice article from the New York Times written by Jon Pareles on what he considers 2009’s best in music. Green Day’s 21st Century Breakdown is at #3 with the following:

3. GREEN DAY “21st Century Breakdown” (Reprise) Green Day’s second rock opera is more ambitious than “American Idiot”: richer, more diverse, more urgent, more flat-out tuneful and also more confusing. The ultimate target of the songs’ rage and frustration can be unclear — the most pointed song can only ask “Do you know your enemy?” — but the ambition and the spirit of punky rebellion are strong. (Jon Pareles, New York Times)

Maybe he could have left the word, “punky” out, but it’s a good blurb. And I don’t know if 21st Century Breakdown is “confused” so much as “ambiguous.” However, I completely agree with the “ambition and spirit” part. Anyway, pop on over to read Pareles’ other picks as well as listen to clips of select music, including “Know Your Enemy.”

I was listening to The Network today while rearranging my mind, and started thinking of wrestlers… Luchadors, Luchadoras and Snoos… 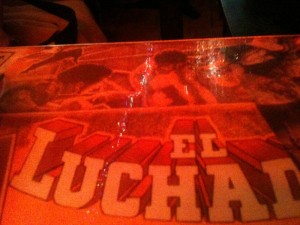 The First and Only Luchador: The Snoo