East Jesus Nowhere – Ticket to Hell Has Never Been So Fun!

NOTE: I drafted this a while ago but never published it. 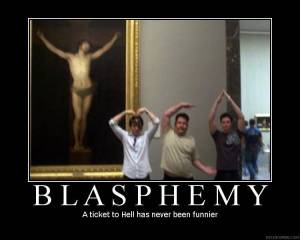 Blasphemy - A Ticket to Hell Has Never Been Funnier

With that said, I want to take a moment to put the title of the posting into context… and then hopefully say something. We’ll see if any of the above happens.

During the American tour (which can provide a basic roadmap for those of you looking forward to the European, Australian, New Zealand and Asian tours), “East Jesus Nowhere,” was usually the fourth song of the show, preceded by “Song of the Century,” “21st Century Breakdown,” and “Know Your Enemy.” Billie may say some crazy stuff about pot-smoking and fornicating at the beginning, (haha, one only hopes he does!), and then the band launches into the song. At the record’s bridge, Billie asks the audience to provide a child, any child about 10 years or so of age, which parents in the house readily do. Billie then ‘saves’ this sweet and innocent youngster. I’m never sure what he’s saving the kid from, but I know that I would have much rather been saved by a Billie Joe than by a preacher.

Here comes the requisite disclaimer in this day and age: I do not dislike religion itself. My philosophy is worship anything you want but do not force me to worship the same way that you do. Don’t try to save me and I won’t try to save you, unless I see you about to get hit by a car on the street. Don’t preach purity when your bathroom is filthy. Or something like that.*

“East Jesus Nowhere” is a powerful and problematic song. It’s destined to be on the radio. It’s also destined to cause some religious circles to go ballistic if it makes it there.

There’s been some buzz about whether the lyrics will be changed when it gets more airplay. I really hope the band doesn’t change a bit of it. We’ll see what the future brings. In fact, I heard it on the radio when driving in my rental car a while back and some words had been obliterated. Needless to say, I screamed a little bit.

Raise your hands now to testify
Your confession will be crucified
You’re a sacrificial suicide
Like a dog that’s been sodomized
Stand up! – All the white boys
Sit down! – All the black girls
You’re the soldiers of the new world

Say a prayer for the family
Drop a coin for humanity
Ain’t this uniform so flattering?
I never asked you a God damned thing

-also, these are my opinions alone and do not reflect anything that anyone else might think or say. There, I think that covers it.

2 responses to “East Jesus Nowhere – Ticket to Hell Has Never Been So Fun!”