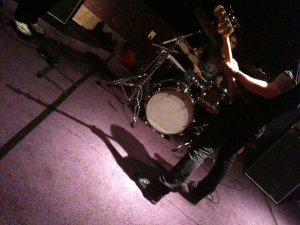 Back in March I reported that there were mysterious and frustrating images appearing on the Frustrators’ Facebook page. The photos were a series of shots with bits and pieces of band equipment and body parts. And lunch. Since the photos appeared, wild rumors of a new album from the Frustrators have been running rampant among the zombies in the bunker, and we’re all… uh, THEY are all… waiting with baited breath (if they could breathe) to hear what’s up with the Frustrators.

I’m happy to report that Lisa Booth, a writer for Punk Globe Zine, has managed to tickle her way through those breathless zombies to interview the elusive lead singer of the Frustrators, Jason Chandler. Chandler’s always working on something or another in the bunker, but he managed to literally break himself away from his work and speak with Booth. I’m not quite sure what they will discuss (maybe confirmation of a new album? maybe playing a gig? maybe what he had for lunch?) so you’ll just have to wait for the next issue that comes out on July 1st. The article will be posted both on Punk Globe and afterward on Booth’s blog, located here.

This zombie is very excited to hear the news, indeed!