"Something to Believe In" by The Razorbax

One of the things that I’ve enjoyed about my 21st Century Breakdown with Green Day has been meeting people in line along the way. When I traveled to London back in October to see Green Day perform for two nights at London’s O2 arena, I met tons of English and European fans, and one each from Australia, Brazil, and South Africa. Leigh Bucknall, lead singer and guitarist of the up-and-coming British band, “The Razorbax” is one among the multitude that I met. While we didn’t hang out for long, I’ll never forget him among the 20 or so other Idiots who spent the night at Sharon and Graham’s “Longview” estate in Kent, staying up late into the night eating, drinking and loudly singing Green Day songs. That’s the kind of ‘estate’ I like to be in!

The Razorbax hail from the English West Midlands area which surrounds the once mighty industrial engine of Great Britain, the rough and tumble city of Birmingham. Their musical sound combines British punk and rock (or punk ‘n roll as they call it) that flows through their anthem-like music. They note that their influences are The Clash, The Jam, and Stiff Little Fingers, with a touch of The Who’s rock sound and a nod to the Birmingham Brum of ska. The Razorbax come from an area with a long tradition of rock ‘n roll ranging from metal (Black Sabbath, Judas Priest), New Wave (Duran Duran) and ska (The Beat) and has a distinctly British sound. Their biggest influence though, is, you guessed it, Green Day. They’ve been listening to Green Day all of their lives and Leigh’s been known to wear the Flag T-Shirt of the Adeline Records logo and their bassist, James Kitchen, plays a Mike Dirnt Fender Bass (the one with the black star). The band’s name, Razorbax, can be found in the title of the Green Day song, “One for the Razorbacks” from 1992’s Kerplunk!

You can hear The Razorbax single, “Something to Believe In” if you go to their site located here.

The guitars are fast but melodic and the drums and bass call out a steady beat for the head to bop to their rhythms. The Razorbax capture a young, English, working-class rage about their world, but with a sort of sweetness thrown in. Leigh’s voice is a bit… angelic with a rough edge around it… and when he sings out “Wake Up! Wake Up!” [LYRICS HERE] you kinda go, ok, I will! Their self-financed debut album, Something to Believe In, released on March 15, 2010, weaved its way onto independent charts in England when it came out. The band, which includes Bucknall on lead vocals, guitar, and piano, Kitchen on bass and vocals, Jack Perry on guitar and vocals, and Louis Bowen on drums and percussion, will be performing at the Luminaire Club in London on Friday, June 18th, 2010, as the headlining band for a benefit, “Punks Play for Autism.” They will also release their album title song, “Something to Believe In” with “A Better Place,” and proceeds from the show will benefit The Autism Trust in England. The Autism Trust was founded by a mother with an autistic child, Polly Tommey, and the organization’s mission is to “create a future with purpose for children and adults everywhere with autism. We aim to do this by developing an international network of innovative, high quality environments: Centres of Excellence in Autism.” Read more and get involved at their site here.

You can hear “A Better Place” and see the video, dedicated to the Autism Trust, below. For more information on the event itself, including tickets and venue, check out Nova-Caine.com. Opening bands include Sam Maloney, The Write-Offs, and SH!ftY SaRaH. You can’t beat it for £6.00 in advance, £8.00 on the door.

The Razorbax – “Better Place” – For the Autism Trust

The band is currently in the running for the semi-finals of Surface Unsigned, a British festival of competing unsigned bands across Europe. Winning bands get a record deal. If they make it through the next round on July 31st, then it’s off to the finals at the 02! Good luck, guys!

I was supposed to fly to London to see Green Day perform at Wembley Stadium on June 19 and see the Razorbax on June 18, but unfortunately, finances have gotten in the way of both and I won’t be able to make it. If you are in London on June 18, I highly recommend that you head on over to the Luminaire Club for a night of British punk ‘n roll. I am sad that I will be missing this show, I would really love to see the Razorbax live, but I hope all of you that have the chance to go to London for Green Day at Wembley will take some time out to support not only the Razorbax, but the Autism Trust, too.

A big shout out goes to their spunky DIY promotion team, Nova-Caine Music. Go on over to their site and check out bands Kuda Bux and Army of Freshman. And support unsigned bands!! Cause you know, as Thom Yorke says, the record industry is on the verge of collapse… all the more reason why independents need your support!

Tre Cool on the Radio

Yesterday, June 7, 2010, Tre Cool did a series of on-air interviews with various U.S. radio stations. I listened to two of them yesterday, one from KROQ Radio (h/t DJRossstar) and one from a podcast called Cara’s Basement (h/t Robin) from Chicago’s WTMX. Take a listen as Tre, calling from Helsinki, talks with Cara about Rock Band, Lollapalooza and verbally confirms that the band will be flying into New York for the Tonys. This last part makes me happy because even though there’s a big splash page at Greenday.com saying that the band was “set to take the stage” for the Tonys, there was still confusion among fans as to whether or not Green Day would fly into New York for the June 13 Awards, as they have a gig in Austria the night before on June 12. However, I noted a while ago somewhere around here that they have a break in their European tour schedule until June 16 when they hit Manchester, so, God willing and the crik don’t rise, the boys will be with their American Idiot cast kids no matter what happens at the Awards. I couldn’t even imagine Green Day not being with them for it.

You can click on the image below to hear the interview: 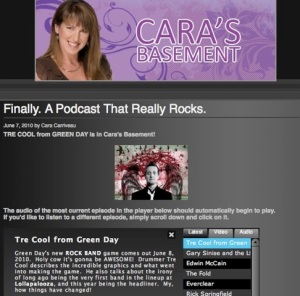 This interview link is no longer available: 93.3 WMMR Philadelphia [AUDIO] GDA notes that the interview comes at 1:50