I started writing this right after the Pinhead Gunpowder show happened on February 12, but a few things got in the way, including the death of my Uncle while I was still in California. So, I know it’s been a while, but enjoy nonetheless. 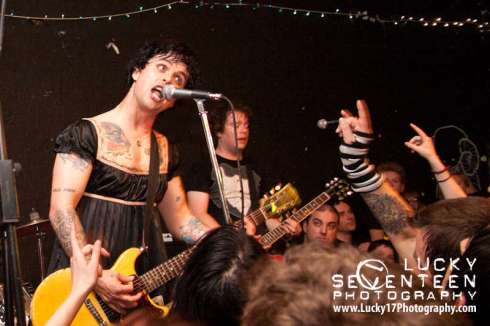 A Show? There’s Going to Be a Show?

I had heard that there was going to be a super-secret benefit show by Pinhead Gunpowder at Gilman and I became obsessed (or as I like to say, focused) on the possibility of seeing a Green Day-related side project band in a small and intimate, show. My friend who introduced me to Billie Joe at Fake New Year’s in Los Angeles back in November keeps telling me that I heard it directly from Billie Joe himself that night because Billie Joe told him about it and I was standing there when he said it, but hell if I remember that happening. That night, all in all, is a bit of a blur.

After going to London in October to see Green Day at the O2 and then missing the Foxboro Hot Tubs by a bloody week, I became determined to head to my now favorite place on Earth, the East Bay, to see the band. PHGP is a band that I was only slightly aware of (shoot me) seven months ago and I wanted to see my friends in the Bay. As an extra bonus, the Mystic Knights of the Cobra (MKOTC) were playing at the Uptown at some point during the weekend, too. (I’ll be writing about that show in the next week.)

The rumor machine had PHGP playing on Saturday, February 13, 2010 at first, and MKOTC were rumored to open for them. However, it became evident that MKOTC weren’t going to open as they had been… Uh… banned from Gilman from the last time they played there. Then MKOTC booked a show at the Uptown for Saturday and were certainly not playing with PHGP and everyone’s attention somehow obsessed (focused) on the rumor that the benefit for Anandi Wonder, a friend of PHGP’s who was suffering from breast cancer, would happen on Friday, February 12, 2010, instead.

There had been some hard and fast talk saying that if news of the show came out too early and too furious, that the show would be canceled. I’m paranoid and pretty good at keeping a secret, but after a bit of sidestepping around the subject, a group of, shall we say… well-researched folks… from the Green Day Community somehow found themselves planning a weekend in the Bay.

I asked a friend to help me out (again) with a cheap buddy ticket on Continental, asked my friends in the Bay if I could stay with them, rented a car and prayed that nothing like a blizzard or anything would stop me from going. I had no cash, really, for any of this, and the cheap Continental ticket was a godsend that eventually turned into a nightmare.

And while everyone was busy keeping their mouths shut, Billie Joe himself, who is not known for keeping some things quiet, spilled the beans the night before the show on Twitter…

… and greenday.com was geeky enough to actually twit about his Tweet. It always cracks me up when they do this.

There was one giant glitch in my crazy plans: Northeast winters and their ability to make things go a bit haywire. The week before the February 12th show, a storm caused major disruptions in transportation and life in the Maryland and DC areas and I literally thanked my lucky stars that it hadn’t reached NYC. Of course, I still had a week to leave the city so anything could happen, and yes, it did.

On Wednesday, February 10th, two days before the show, with people heading to the Bay from the East Coast on Thursday and Friday, a proclaimed “Snowpacalyse” poised itself to hit the East Coast again and this time, NYC was destined to be in the eye of a twenty-four hour storm. Just. Fucking. Peachy.

A few folks including me were slated to fly standby. Standby works only if the airline does not sell out seats and they end up distributing tickets to friends and workers for a nominal fee at the gate. And I mean, nominal. If a storm disrupted service for a few hours, we still had good chances of getting the cheap seats. Any longer than that, and we were screwed. Wednesday’s 24-hour storm busted the best of good intentions for people WITH tickets, let along dweebs like me catching a good deal.

Larry Livermore posted on his Facebook a declaration that the storm had better be a doozy, because he had just given up his spot on his flight after being told that he couldn’t get booked on any other flights. Read more on his story, which sums up a lot of my own feelings about the Snowpocalypse here.

Anyway, long story short, by the time my flight was suppose to leave the East Coast on Thursday, we had such a blanket of storm that my satellite teevee went out on Wednesday, which hardly ever happens. I had already changed my original Thursday flight to Friday in anticipation of the airline industry shutting down on Wednesday (announced on Tuesday), and I went into work on my vacation-day Thursday, hoping in vain that I would actually get on a Friday standby flight. I was, to say the least, freaking out.

Another person who lives down in Virginia was slated to leave on Thursday, but her flight out of Dulles was canceled, and another friend helped her rebook her ticket by way of multiple destinations. I could feel the entire weekend that I had looked forward to for so long becoming something that would not happen if I didn’t take action. So I did.