Frustrators are Bored in the USA

Lis Booth’s interview with Frustrators frontman, Jason Chandler, is now online at Punk Globe Magazine and at Lis Booth’s blog here! As I suspected he doesn’t say much about any new Frustrators material (damn you, Chandler! *shakes fist in air*) but you can learn how Jason found himself in the band and read about the few gigs that the Frussies have played.

I have this dream that when I go and see Green Day’s Homecoming show in the Bay area in early September, that the Frustrators will play a gig around then, too, just for shits and giggles. I mentioned this on the Frustrators Facebook page and got the reply, “Dream until your dreams come true,” so I figure that’s a whole lotta dreaming that I have to get cracking at. I am up to the task since I do like to sleep!

Check out Punk Globe monthly for interviews with a multitude of punk bands from around the world. Here’s the link to the online magazine. UPDATE: Don’t forget to check out Lis’ blog, too. Click HERE. 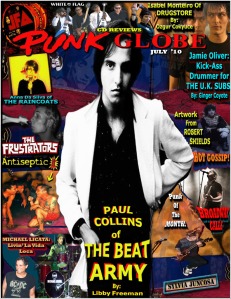 Adeline Records announced a charity auction today via their Facebook page and Adeline Records website. All proceeds from the auction will help Doctors Without Borders with their relief efforts in Haiti.

eBay items for auction include Rock Band (not the GD version) items, vinyl from Green Day, the Foxboro Hot Tubs, AFI, and Broadway Calls; Green Day’s “Live from Tokyo” EP on CD, as well as a “Rock of Art” catalog. So head on over and bid for stuff to fill out your own personal collection and help Doctors Without Border help Haitians with much needed medical care. It’s still a massively desperate situation in Haiti and while we’re all broke here in the States right now, at least most of us have a roof over our heads for the most part.

Follow Doctors Without Borders/Médecins Sans Frontières (MSF) on their Facebook page or on Twitter for all the latest updates on their efforts in Haiti and around the world.