I was having a great day yesterday that quickly turned into a shit day. It’s funny how events can turn around so quickly. One minute you’re feeling great, the next minute, you’re ready to punch a wall or a person nearest you. I’m sure that you can understand where I’m coming from.

I was feeling really down and horrible about my life. Thoughts were rushing in and out of my head at breakneck speed chastising me for what I perceived as failure. My brain was running a mile a minute in a constant chorus of failure, failure, failure. Blah blah blah. It was a pity party in my brain, that’s for sure.

For Green Day fans, some of you may know that this line is partially from a new tattoo that Billie Joe recently got. While it’s a great excuse to post a photo of Billie Joe’s chest… ahem… it’s also a really nice opportunity to take a moment to reflect on the full saying. Abbey then went on to post a picture of the poem, and seriously, reading it got me through another day. (And yes, the picture of BJ’s chest didn’t hurt either.)

The line itself is from a poem by the Sufi mystic, Rumi. Here’s a collection of other poems by Rumi, which are not just poems, but also mystical ruminations similar to Buddhist koans on which to meditate regarding the meaning of life. I’m not going to go into any interpretation of the sayings. I leave that to you. Nor am I going to speculate on why BJ got the saying tattooed on his chest. No one knows, and that’s his personal business. I do hope, however, that you take a moment to read the quotes…. and have a great day.

If you’d like to talk about the sayings in the comments, please do. And thanks, Abbey. 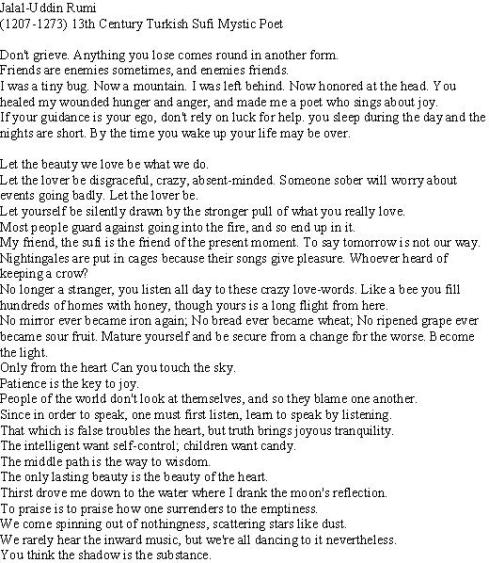