What’s Up With the Frustrators?

The world of music is somewhat familiar with Green Day’s “alleged” other bands such as The Network and The Foxboro Hot Tubs and Billie Joe’s side project, Pinhead Gunpowder. While these three bands get a bit more fanfare, Mike Dirnt’s Green Day-side project, The Frustrators, gets a bit less of it. They have been around since 1999, mostly playing in their garages and drinking beer, though they have played live a few times over the past ten years. I can’t say that I had heard of them prior to my crazy 21st Century Breakdown plunge starting last year, but my life has been much funnier and happier since I got their two CDs this past December when Adeline Records had a stupid awesome sale on stupid awesome merchandise and music. 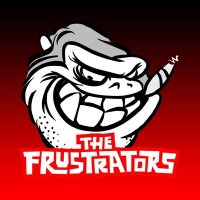 The Frustrators have one great album out, Achtung Jackass (2002) and an excellent EP entitled Bored in the USA (2000) both of which appear on the Adeline label as well as a song called “Trout” that appears on Adeline’s Might As Well… Can’t Dance compilation from 2000. The song is presented backwards as an added bonus track on Achtung Jackass just cause it sounds as good backwards as it does forward. (You can hear the forward version of “Trout” on the Frustrator’s Myspace site.) The records feature the hysterical (as in funny) lead vocals and rhythm guitar of musician, graphic and comic book artist, Jason Chandler, Terry Lineham (backup vocals and lead guitar), Mike Dirnt on bass, and Art Tedeschi on drums. A brief history of the Frustrators, written by Netty, can be found here.

The band’s self-deprecating lyrics, mixed with a pounding bass and drum section, and blazing lead guitar, makes for some intense and hilarious songs. Chandler’s rye sense of humor, whether singing about getting lost in the Texas desert (“West of Texas”), pirates (“Pirate Song”), tossing midgets (“The Great Australian Midget Toss”), Terry’s lovelife (“I Slept with Terry”), or forlornly singing about a girl who walked away… whether real or imaginary (“Then She Walked Away”)… is a treat and always manages to make me laugh and want to dance. It’s very manly music, too. I am not quite sure how to define “manly” in regards to it, but don’t a lot of manly men long to sing songs of pirates?

Jimmy Zeus, the cigar chomping, monkey manager of the Frustrators, recently posted the mysterious image above on the Frustrators Facebook page. The photo, along with some mysterious and frustrating statements from Zeus (and Chandler, who shows up on Facebook here and there) may be of the band possibly recording tracks during a bit of downtime from Green Day’s ongoing tour. Yawzah!

I hunted Chandler down from within his Zombie-protected bunker to ask what was up, and though he’s tight-lipped about stuff regarding the future of the Frustrators …no doubt because his zombies have eaten his lips away… he managed to three-finger type the following response:

Basically, we’d all love to do another record. We’ve all got some ideas. And actually by crazy strokes of luck we’ve been able to hang out recently. But writing and recording is a long process and can be tricky once you consider all the little difficulties with people’s schedules and my own deep personality problems… So who knows?
–Jason Chandler, from somewhere deep underground (aka Facebook)

So there you have it! Something is up with The Frustrators, though how, when, where, and what are yet to be determined. Why is a bit more simpler… because we need more Frustrators in our lives!

Writer, blogger, archivist, not a mom. Three cats. Used to go to a lot of punk shows. END_OF_DOCUMENT_TOKEN_TO_BE_REPLACED
This entry was posted on Monday, March 1st, 2010 at 1:53 am and tagged with Achtung Jackass, Art Tedeschi, Bored in the USA, Jason Chandler, Mike Dirnt, Terry Lineham, The Frustrators and posted in Frustrators, Green Day's Other Bands, Mike Dirnt. You can follow any responses to this entry through the RSS 2.0 feed.
« Character Approved Awards with American Idiot Cast and New AI Trailer
It’s Lushotology with John Roecker and Kryssi Kay! »

12 responses to “What’s Up With the Frustrators?”