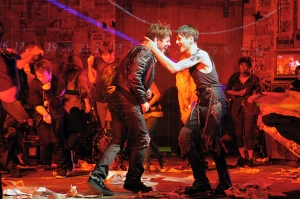 If you are a fan of a punk or pop band (or a punk/pop fan for that matter) as well as the theater, you rarely would think of your favorite band creating new wonders for what some believe is the old, worn out, medium of live theater.

I thought I’d never see the day when a rock band from the 21st century would endeavor to bring an album to the stage again. The night before I saw Green Day perform live on Good Morning America in May at Central Park, I saw a production of the The Who’s Tommy performed by the Gallery Players in Brooklyn, NY. The musical was fabulously performed, with an earnest, fresh cast, and though the show itself is a a bit dated, the love for the music never dies with Tommy. Who can’t rock out to “Pinball Wizard” or get emotional with “See Me, Feel Me” or be mesmerized with the eerie premise of “Fiddle About” or be astounded by the power of “Acid Queen”?

Yet, the rock musical coming directly from a band these days is a rare proposition. Traditional Broadway crowds don’t like the loud, bold sounds of rock on their stages, but Broadway needs fresh musicals, the backbone of the Broadway economy, to survive. Current Broadway musicals like On the Heights (a great show originally performed downtown that moved to B’way), Rock of Ages (a show that you have to pay me to go see), Mama Mia (really? really?) and Billy Elliot (I’m glad all three kids who play the title character won Tonys, but I’m not paying $100 to see it) are thriving somewhat at the moment, but all in all, Broadway needs a few good, loud, raucous and audacious, pure rock musicals for a shot in the veins. Certain musicals, created by less-Broadway traditional musicians or theater folks, such as Rent and Spring Awakening, bring excitement and freshness to the stage and lure in new audiences that replace the older, staler B’way theatrical models. Mind you, I have never seen either Rent or Spring Awakening in full, mostly because I have issues with over-hyped productions of any sort, but I follow Broadway closely enough to know the storylines, the music, and the impact that both shows had on bringing new audiences into the theater and shaking up the status quo.

Well, there’s at least two rock-based shows on off-Broadway currently making their way to the big stage over the next nine months that will impact Broadway in a positive way: Green Day’s American Idiot and Lizzie Borden The Show, though Lizzie Borden does not originate from a band’s album. So let’s get back to the original premise: it’s good to know that in the near future, an actual band will bring some fresh spunk to the Broadway stage, and that band is Green Day and that show is American Idiot, which officially opened at the Berkeley Repertory Theatre on September 17th.

While it’s not a done deal that Green Day’s American Idiot (or Lizzie Borden for that matter), will actually make it to the Great White Way, it’s a forgone conclusion at this point that more than likely it will. It’s got everything going for it: powerhouse Broadway veterans such as Michael Mayer (Director) and Tom Hulce (Producer), and a cast that is incredibly talented, including Spring Awakening lead John Gallagher, Jr., the irresistible Tony Vincent, and Rebecca Naomi Jones, of the Passing Strange cast, and this isn’t even taking into consideration the band, Green Day, or their seminal 2004 album, American Idiot. All of this equals one thing potentially: next stop, Broadway.

Green Day’s American Idiot, in previews for the last two weeks, opened to generally good local reviews today, including reviews in newspapers such as the San Francisco Chronicle, the San Fransisco Examiner, and the San Jose Mercury News, and blogs such as SFist, The Dope Report, and a review/report on the opening night from Rolling Stone. All of the reviews were generally positive, with some constructive criticism thrown in, but for the most part, positive. Of course, not everything is honky dory, as in this hyper-negative review from Jim Harrington at the A+E Blog from the Mercury News. It’s so hyper-negative, though, it kind of sounds as if the guy thought that the band was playing, and not a cast of 19 and a six-piece backup band. Harrington, who is a fan of Green Day, has nothing positive to say, and I find it difficult to believe that he found nothing redeeming in the show after reading the other reviews. Maybe he was just having a “Red Tide” moment, as it were.

On the whole, reading reviews from Green Day fans at the Green Day Community as well as the majority of reviews above, I’d say that with a few tweaks in the storyline (it’s consistently noted as weak), American Idiot could land in New York and London’s West End.

Just in case it doesn’t happen, however, Billie Joe has the right attitude toward it all, as reported in the New York Times:

For his part Mr. Armstrong, whose early Green Day performances were at 924 Gilman Street, a well-known local performance space, said he’d love to see the show make it to Broadway. But he’s not worried if that doesn’t happen.

“I think that would be cool,” he said of a New York run. “But if it ends up playing Gilman Street, that’s cool too.”

While I wonder what’s happening tonight at Green Day’s show in Phoenix, where free tickets are being distributed to hardcore fans at the Idiot Club for a special taping for the tour’s sponsor, Verizon, my thoughts turn toward next month’s upcoming musical opening at the Berkeley Repertory Company. (I’m also hoping that when they say it’s for Verizon that I will not have to regret the only thing about my having an iPhone… and that’s AT&T… because non-Verizon customers won’t be able to see it. Blech.)

Via my Google News subscription, I got a notice saying that Rollingstone.com’s “Rock and Roll Daily” had posted an online dossier of the cast of Green Day’s American Idiot, including a few Youtube highlights with the likes of the Spring Awakening cast and a fine turn of tune with Queen by Tony Vincent as the late, great, Freddie Mercury (may he rest in peace).

Queen with Tony Vincent and the Cast of We Will Rock You, singing for the Queen’s Jubilee at Buckingham Palace

From Mass Hysteria at the GDC, comes links to the Berkeley Repertory Company’s Blog that has been giving periodical updates on the show’s progression. You’ll also get updates on the other shows that are happening for the 2009-2010 Berkeley Rep season as well. It’s a great theater and lots of amazing performances have come out of the premiere theater on the West Coast for ground-breaking performance presentations.

American Idiot is going to be quite the challenge to bring to life, but from the cast profiles and the strength of the director and the band, I can’t wait to see it.