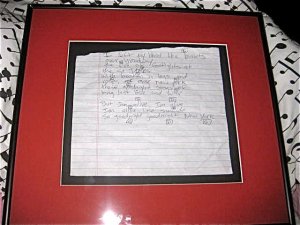 Back in late September-October 2010 when Billie Joe Armstrong first performed in American Idiot for a week on Broadway, he ended his run on October 3. That night he penned a little song and sang it to New York City before the Good Riddance encore. No one knew then, not even him, that he was going to come back for two months in 2011 to star in the show as St. Jimmy. I went to a lot of the shows that week for fear of never seeing him perform again in the show. Hearing him sing this little song live was one of those bittersweet moments that you only get once or so in a lifetime. Sweet because it was a love song to my city of New York and the amazing experience of the theater, and bitter because all fleeting moments of pure happiness are like that in the end.

The tune possessed a strain of both joy and melancholy that cut right through my heart. Sometimes when I’m really down in New York (as has been the case a lot this winter, particularly since the holiday season started), I repeat in my mind the lyrical refrain, “But I’m alive… I’m alive… I’m alive like suicide… .” I grab onto it like a lifeline so that I hold on and hold out for yet another winter of being alive. Winter is my least favorite season and I get all kinds of down throughout it. The lyric has helped me to fiercely remember the actual joy of life and encourages me to grab onto every bit of it through the tough times, as well as the good ones, that I can.

The lyric itself is a bit of a puzzle and has an odd dichotomy. How can anyone be alive or find life through suicide? What is the nature of that state of being? Is it a metaphorical case of leaving one facet of your life behind and steadfastly screaming out in amazement at the very fact of being alive, or finding life through ending it? No, certainly not the latter example. He sang, “I’m alive, I’m alive, I’m alive” so emphatically that it cancels out all thoughts of a real suicide. “Alive” sounds like one of those screams of urgency to “rally out the demons of your soul,” not to give up, certainly. It’s a problematic lyric, much like a Japanese koan puzzle or a quote by the Iranian/Persian poet and mystic, Rumi. We all know how much Billie Joe hearts Rumi.

Back to that night in October: Mary Rosenblatt was sitting at the very front of the St. James in Row AA. Mary brought with her a single red rose to give to Billie Joe. After the encore, she gave him the single rose and he ended up giving her the lyrics.

I know Mary from here and there. I saw her and asked if I could take photos of the lyrics, one of which I put up on Plixi that night. Mary was so happy and shocked, and a little dazed at the same time! What a wealth of emotions and memories that one little sheet of torn-off legal paper can give to one person, let alone to people all over the world.

I’m an archivist, someone who takes care of the correspondence, photos, audio and video of people and institutions. I’ve held numerous kinds of documents in my hands, from the American Revolution and the Civil War, from famous activists, presidents, and performers. When I briefly held Billie Joe’s lyrics in my hands, the only thing I thought was how, in an instant, one piece of slightly torn paper with scribbles on it can go from the mundane to something that is worth framing and keeping safe for Mary’s lifetime and beyond. This one piece of paper, with scratched out words and chords, is one of those pieces of paper.

After the show, I sent Mary some special archival polyester sheets and an acid-free folder to keep the lyrics safe and free from damage until she could get the sheet properly framed, which she recently did. The framed lyric sheet is now somewhere on her wall, a wonderful piece of instant history. I can see it one day being exhibited in the Rock and Roll Hall of Fame.

Full video of “Good Night, New York,” sung by Billie Joe Armstrong on October 3, 2010, shown giving Mary the lyrics. Watch for the funny moment with him giving the guitar away, too. It had a transponder in it, and there was a slight hullabaloo when the person who got it wanted to keep the guitar, but the stage hands had to take the transponder out first. She did get the guitar (or one similar to it) at the end of the night.