First of all, Happy 6th Anniversary today, American Idiot! The album was released on 9/20-9/21/04 in the UK and US, so take some time to revisit the album and say, happy anniversary to it!

Billie Joe Armstrong, Michael Mayer, and some cast and crew of American Idiot on Broadway held a series of “talkbacks” last week at the St. James Theater, moderated by David Cote of Time Out New York, after the show happened from 9/14-9/19. I was lucky enough to attend three performances of the show (thank you Jenne and David! much love to you!) and all five talkbacks (two of which I…uh… just walked in on), and I have to say, it was a special and wonderful time to not only see Billie Joe talk about the show, but to hear great discussions regarding the creative processes of the show itself.

My blog was mentioned at the talkback! Woot! David Cote referred to my interview of Afghan war vet and hardcore Green Day fan, Dawn71, using it as a basis to relate how the show of American Idiot (see video below at 1:01-2:32) reflects real life in terms of war and the impact that it has on life. In the clip below when Green Day Mind is mentioned, Billie Joe kind of shrugs and laughs, saying that “He had never heard of the blog,” but it was pretty amazing for me to sit in the audience and have David refer to the blog in a very serious manner. My blog is kind of strange — a personal journey of sight, sound, performance and life — all from the viewpoint of this past year following Green Day. I’ve put a lot of work and love and rage and time into this crazy blogging project, and though it was a bit strange to have him chuckle at first, it was awesome to hear one of my more serious blog posts used to highlight one of the serious themes of American Idiot. Dawn71 was hella happy to know that her love for the band and a story of her life was mentioned as well. Watch the video below to see!

The talkbacks themselves, minus the impromptu audience questions, were pretty awesome. I heard some things about the creative process of the show, particularly from the designers, that I had never heard before, and it was pretty great to have the mix of actors come into the talks to discuss the show from their viewpoint. It was all about Billie Joe, though, who was at the center of the maelstrom, and as the week of talkbacks wore on, questions from the audience stopped being serious ones asked about the show, but devolved more into, “can you sing ‘happy birthday’ to my daughter, ‘can I have a hug,’ and ‘can I give you something, Billie Joe?'” It was cool, though. Most folks never get the chance to meet Billie Joe in person, and hey, if you have the opportunity, you have to go for it!

Though American Idiot itself is more of a personal journey and not necessarily a political one (I’ve always looked at it politically moreso than personally, but the album itself is as much personal as anything else), I have to say, that the album literally dragged me through the latter years of the Bush Administration. I truly don’t know what I would have done without it. Thank you, Green Day, for being one of the few bands of the day that dared to speak out against what Billie Joe referred to at one point as the “regime of the Bush administration.” Billie Joe refers to the time of the album being written and the political and social happenings of those dark days after 9/11, below:

Billie Joe, John Gallagher, Jr. Talks About the Depiction of War in American Idiot on Broadway and the Response of War at the Release of the album, American Idiot— bwaddel996

All in all, it was a great time spent with Billie Joe and the people involved in the musical. I was very happy that I had the opportunity to witness the talks. I also went to see John Gallagher, Jr. perform at Rockwood Music Hall on 9/19, and he’s such a nice guy that he talked with a bunch of us crazy fans after the show. He really is a sweet kid! My friend Michelle, of Lucky17 Photography, took a bunch of great pictures at both the final talkback and at John’s show, and when she posts them on her blog, I’ll let you know. Meanwhile, I have a few blurry photographs that I took, but a couple of them I just absolutely adore. 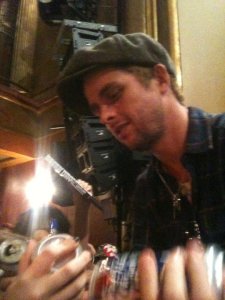 I have never asked the band to sign anything — I sorta hate getting autographs — and the only two pictures I have of me with members of the band were taken by other people (Billie Joe and Mike Dirnt, which was actually taken by Dirnt himself without me asking, good times!), but I just felt that I had to get at least one thing signed, so I did… a new variation of “AWESOME AS FUCK” that Abbey (who Billie Joe tweeted at that he loved, lol, good for Abbey!) came up with, “IDIOT AS FUCK.” Thanks, Billie Joe! UPDATE: Abbey asked Billie Joe and Michael Mayer a pretty long and intense question at the talkback, and I loved the answers given by both men regarding the show. See the video below: 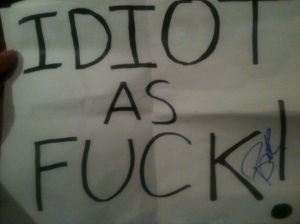 Idiot as Fuck Signed by BJA

All in all, these talkbacks, combined with Billie Joe and Michael Mayer interviewed by Jordan Roth of the Jujamcyn Theaters at the 92StY on 9/19, were… how shall I say… awesome as fuck, and at times, Idiot as fuck as well. Thank you, American Idiot for the good times! Billie Joe left New York on Monday, to head back to the Bay. Have a great vacay before you head off to South America, and say hello to Mike and Tre for us! I missed them.